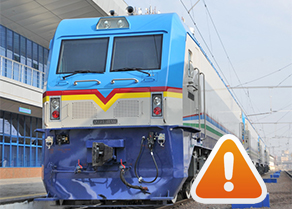 The ABC of Security

The most common violation on the railway is walking along the roads in the    wrong  places.
But you can just dream and not notice the approaching train.
REMEMBER:
- it is necessary to cross the railway only in specially established places and at right    angles;
- do not listen to music records while crossing the railway;
- use special pedestrian crossings, bridges, tunnels, crossings, etc.
The braking distance of the train varies from 33 to 1000 m.
Even the instantaneous reaction of the driver cannot stop the train immediately.

REMEMBER:
- you cannot cross the railroad near the switchgear;
- When crossing, do not step on the rail head; you can slip;
- Never cross the train if the train is approaching!!!
At train movements it is forbidden:
- cross the path immediately after passing the train, At this moment there can be an oncoming train, which you will not notice. And between the two trains, the airflow is 16 tons;
- following the parallel paths, you are endangered by the air flow;
- if there is no other way than on the rail, you should follow both lines, because You cannot hear the signals of the rear-moving train.

On the roads and platforms it is NOT allowed:

- jump and climb on the platform. It is necessary to use established gatherings and pedestrian bridges;
- approaching broken wires;
- climb under platforms and structures;
- Run along the platform next to the train;
- arrange various games;
- Sledging and skiing near the railway track;
- throw stones and snowballs at the window of an electric train in this way you violate traffic safety. The driver may lose the ability to drive a train, which could damage the passengers.

When using railway rolling stock it is not allowed:
- Approach the cars to a complete stop;
- lean against standing wagons;
- protruding from the windows or doors of the train;
- climb the roofs of the train;

REMEMBER! Rail transport is a transport of increased danger, so do not break it yourself and do not let others violate the "Rules of personal safety".

Occupational safety and health at the railway


Labor protection on the railways is a system of preserving the life and health of workers in the process of labor activity, includes legal, social, organizational, technical, sanitary and hygienic, therapeutic and preventive, rehabilitation.

Trauma - a violation of the anatomical integrity or physiological functions of a person caused by a sudden external impact.
Injuries are subdivided into lungs (temporary loss of disability, sick leave not more than 60 days); The average leading to disability and death.

Injuries are classified:
A) mechanical (bruises and fractures);
B) thermal (burn, frostbite, heat stroke);
C) chemical (poisoning or choking);
D) Electrical (burning, stopping or fibrillation of the heart);
E) mental (shock or fright);
F) combined injuries. Injuries are classified in relation to production at a) production (in the enterprise, in the transport of the enterprise, during an accident or crash due to railway fault, injuries associated with hooliganism of the passenger during
Work of a conductor);
B) production is not related to production (obtained in a state of intoxication, while doing extraneous work, in the commission of criminal acts, in suicide or in the event of natural death;
C) non-productive (on the way to work or work, at sporting events in the role of a participant, in the performance of public events and in the performance of civic duty;
E) Household - received on vacation or during their free time.
Accident is a combination of circumstances that led to injury.

Types of briefings:
• Introductory briefing (conducted by the chief engineer and engineer for Labor safety and the safety precautions).
• Initial briefing (conducted by a master or instructor).
• The current briefing is conducted before the commencement of work (conducted by station heads, their deputies, masters, mechanics, electromechanics, foremen, supervisors, foremen and instructors);
• periodic briefings are held every three months;
• Extra briefing is conducted when new instructions are introduced; new equipment is installed, when an accident is committed, at the request of the State Supervision and Control Bodies, with breaks in work for more than three months, with the exception of labor protection warning signs.

Knowledge testing is carried out in three cases:
1. Primary - when hiring.
2. Periodic - once in 3 years.
3. Extraordinary - when introducing new instructions.

Three-stage control consists of three stages of inspections of the state of labor protection and safety at the inspected facility:
The first stage of control is performed by a master, foreman, electrician and labor safety commissioner at the beginning of the working day (shift).
The second stage of control should be carried out once a decade by a commission